Iowa Army of Pink: How dense are you? 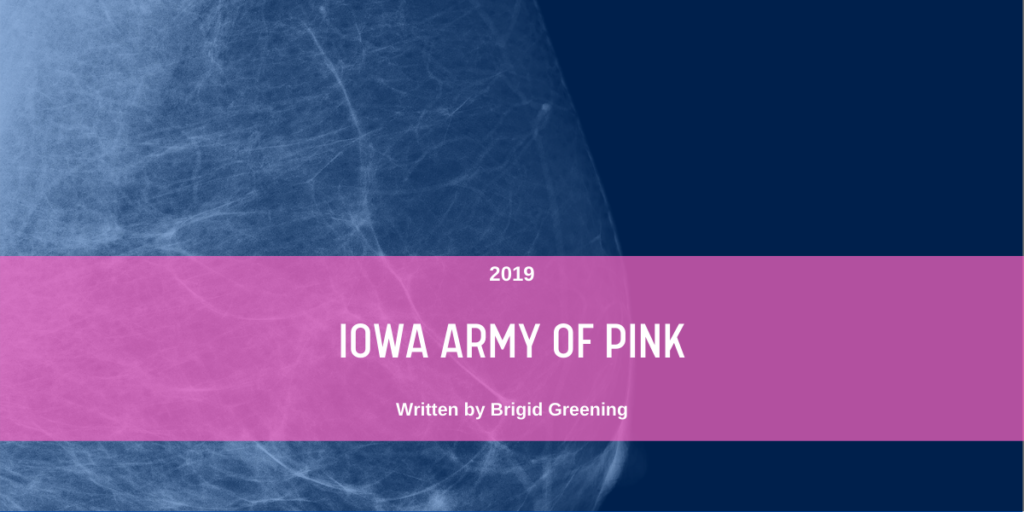 How dense are you? That is a very important question that every woman needs to be able to answer regarding her breast tissue.

My Story:
On September 8, 2016, I did a self-breast exam. I did not do them consistently and was surprised to feel a lump on the outside of my left breast. I was tempted to just blow it off, but thank goodness I didn’t. I was able to get in for imaging the next day. After the initial mammogram, I was told I would have an ultrasound.

According to the American Cancer Society, “Ultrasound is useful for looking at some breast changes, such as lumps (especially those that can be felt but not seen on a mammogram) or changes in women with dense breast tissue. It also can be used to look at a change that was seen on a mammogram.”

The radiologist came in afterwards and told me that there was a mass, so I needed a biopsy followed by another mammogram. When I returned to the same tech, she seemed surprised when I said the ultrasound showed something. I recall thinking, “Didn’t she see it there on the mammogram?”

Three days later, on September 19, I had my biopsy. My diagnosis: stage IIB invasive ductal carcinoma. My lump was 2.4 cm and had spread into a lymph node, that had also been biopsied.

Two days later, we met with my surgeon. The first thing he said was that the cancer had been growing in me for about 18 months, to which I replied, “But I had 3 mammograms in the last 18 months?!” He stated that I had dense breast tissue and that it can make finding cancer much harder. Those three earlier mammograms had been done to check on some areas of calcifications, which were also biopsied and were DCIS (ductal carcinoma in situ) – basically stage 0 cancer. So, the radiologists were watching these little areas and missing the big 2.4cm tumor that was “hiding” in my density!

At that point, I just wanted to get going on treatment so that I could get done with it. On September 30, 2016 (22 days after finding my lump), I began my five months of chemo, followed by a lumpectomy and 36 radiation treatments.

In the middle of my 20 weeks of chemo, I met Bridget Pargulski, a fellow breast cancer survivor whose two tumors (1.8 cm and 2.3 cm) were missed for five years due to breast density. She mentioned lobbying at the Iowa State Capitol for legislation to inform women if their mammograms show dense breast tissue. So, in January, bold and bald, I began lobbying with Bridget and Dr. Robert Shreck, a retired oncologist. The two of them had been advocating for five years already. I came in at the right time because the bill passed almost unanimously in both houses and Governor Branstad signed it into law on April 13, 2017. Iowa was the 29th state to pass a breast density inform law.

Knowing Your Breast Density
Breasts contain glandular, connective, and fatty tissue. Breast density is a term that describes the relative amount of these different types of breast tissue as seen only on a mammogram. Dense breast tissue cannot be felt in a clinical breast exam or in a breast self-exam.

Doctors use the Breast Imaging Reporting and Data System (BI-RADS) to group different types of breast density. The system, developed by the American College of Radiology, helps them to interpret and report back mammogram findings. BI-RADS classifies breast density into four categories, as follows:

Individuals with dense breasts have a higher risk of breast cancer than women with fatty breasts, and the risk increases with increasing breast density. The increased risk is separate from the effect of dense breasts on the ability to read a mammogram.

I challenge each woman to find out what her breast density level is! If you don’t have your last mammogram letter, ASK!! Your breast density is on the report to your primary care physician.

More medical research has been done recently regarding breast density, along with so much more about how various demographic groups are affected by breast cancer in different ways. Discuss your personal risk of breast cancer with your healthcare provider.

Even if you have dense breasts, regular mammograms are still important to the early detection of breast cancer. You should also continue to be familiar with how your breasts look and feel, reporting any changes to your doctor.

Experts do not yet agree on which additional tests, if any, should be done for women with dense breasts. According to the American Cancer Society, research indicates that breast ultrasound and magnetic resonance imaging (MRI) may help find some breast cancers that mammograms don’t detect. However, these tests may not be covered by your insurance.

I have been able to say that I have NED, No Evidence of Disease, since March 2017. Life has established a new normal. I am on the board of the Iowa Army of Pink, which works to educate women about breast density and to make sure women realize that there is more to the mammogram than just looking for the message “NORMAL” on our reports. Once we are fully informed, we can be empowered to discuss our individual case with our personal doctor to determine the next step, if any additional imaging is warranted. Above and beyond everything else, know what your breasts feel like normally. Know what they look like normally. Watch for changes such as nipples pointed in different directions, bloody discharge, or skin that looks dimply.

For further information, patient education cards, and videos in both English and Spanish, visit www.IowaArmyOfPink.org.

Another fabulous website is www.densebreast-info.org, a medically sourced, comprehensive site for both patients and health professionals.