My name is Judy Smelser Mitchell.  I have Lynch syndrome.

What is Lynch Syndrome

Lynch syndrome, also known as hereditary non-polyposis colorectal cancer (HNPCC), is the most common cause of hereditary colorectal cancer. People with Lynch syndrome typically acquire their cancer at a younger age (before 50) with the most common cancer sites being colon and uterus but also include ovary, stomach, rectum, small intestine, liver, ureter, renal pelvis, pancreas, brain, and certain types of skin cancers.

Lynch syndrome is due to inherited changes (mutations) in genes that affect DNA mismatch repair, or the process of ‘spell-checking’ to correct mistakes when DNA is copied. Normally, these genes can protect a person from getting certain cancers, but the mutations within these genes prevent them from working properly.

A Family History of Cancer 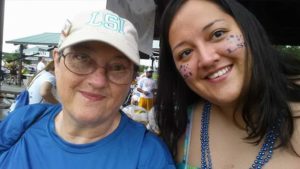 Growing up I knew that in at least four generations of my dad’s family men had died of stomach or colon cancers. My daughter was hospitalized with severe abdominal pain and a high fever in 2011 at the age of 33. A CT scan showed an inflamed colon. The doctors suggested colitis and I shared that a niece and nephew had colitis. Instead, the diagnosis was a large cancer of the sigmoid colon.

My daughter’s oncologist ordered a genetic test for Lynch syndrome. When her result came back positive, he ordered one for me looking for the same specific mutation. Once my results were available, we contacted my siblings and they also tested. Three of my five siblings were positive. Then, the adult children of those three were encouraged to do the genetic test. About half of those nieces and nephews also have the mutation. I’ve also shared information about Lynch syndrome with cousins.

The More You Know 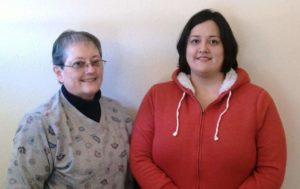 If you are concerned that you could have Lynch syndrome, or another mutation related to colorectal cancer, the first step is to collect your family health history of colorectal cancer and share the information with your health provider (CDC, 2020).