The special section in the Cancer in Iowa 2021 report featured racial/ethnic cancer disparities in Iowa. This year we examined the cancer experience of Iowans according to the following racial/ethnic groups: non-Hispanic (NH) White, NH Black, other races including NH Asian/Pacific Islander and NH American Indian/Alaska Native, and the Hispanic population.

As background, the Iowa Cancer Registry/State Health Registry of Iowa has collected data on cancer incidence (new cases of cancer diagnosed each year) and mortality (deaths due to cancer each year) for the state of Iowa since 1973. We have population data for the groupings listed above since 1994 so our focus for this report was 1994-2018, which is our most recent year of complete data. Of note in the forthcoming figures, the “other” group includes NH Asian/Pacific Islander and NH American Indian/Alaska Native combined because there were not adequate numbers of people in each group to be included in the analyses separately.

The Facts are in the Figures

Figure 1 shows the NH Black population has the highest age-adjusted cancer incidence rates from 1994-2018. The rates have been decreasing since 1994-1998 in all groups other than NH Whites. 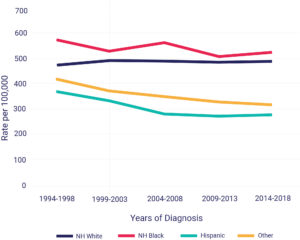 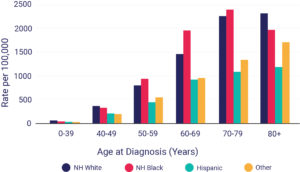 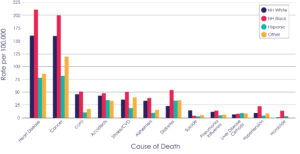 While the difference is narrowing, there is more work to be done. The state of Iowa has been shown to have the second highest cancer mortality rates in the Black population for 2019 in the US (Number of Cancer Deaths per 100,000 Population by Race/Ethnicity | KFF). Inequalities in socioeconomic status, including factors such as income, education level, occupation, and access to healthcare are important social factors that may differ by race/ethnicity and therefore contribute to cancer health disparities. The socioeconomic status of individuals and neighborhoods can affect environmental (e.g., housing, exposure to hepatitis viruses), psychological (e.g., stress), and behavioral (e.g., tobacco and alcohol use) factors that influence health. One recent study estimated that eliminating socioeconomic disparities could prevent 34% of cancer deaths among all US adults ages 25 to 74 (2).

Even after accounting for socioeconomic status, institutional and structural racism play an important role in causing inequalities, and they can also directly influence health outcomes. For example, residential segregation (the physical separation of two or more groups) can make it harder for some racial/ethnic groups to engage in healthy behaviors, such as accessing healthy foods, spaces for physical activity, and health care. Inequalities in access to preventive care (e.g., smoking cessation), screening services (e.g., colonoscopy and mammography), and the quality of care received are important modifiable clinical factors that contribute to cancer health disparities.

Research has shown that racial and ethnic minority patients often receive lower quality care compared to White patients (3-4). For instance, factors that contribute to these differences among minority populations include lower representation in clinical trials/studies, mistrust in the healthcare system, treatment from less experienced providers/hospitals, and health care providers’ beliefs and biases. Also, health insurance status is one of the most important factors determining access to quality cancer care. Individuals who lack health insurance have a higher risk of poor outcomes from cancer compared with those who are insured (5-9), and racial and ethnic minorities have lower rates of health insurance compared to the White population. In conclusion, this report is an important step in furthering the discussion of health disparities in the state of Iowa.

This project has been funded in whole or in part with Federal funds from the National Cancer Institute, National Institutes of Health, Department of Health and Human Services, under Contract No. HHSN261201800012I.

Click here to view the full 2021 Cancer in Iowa report.